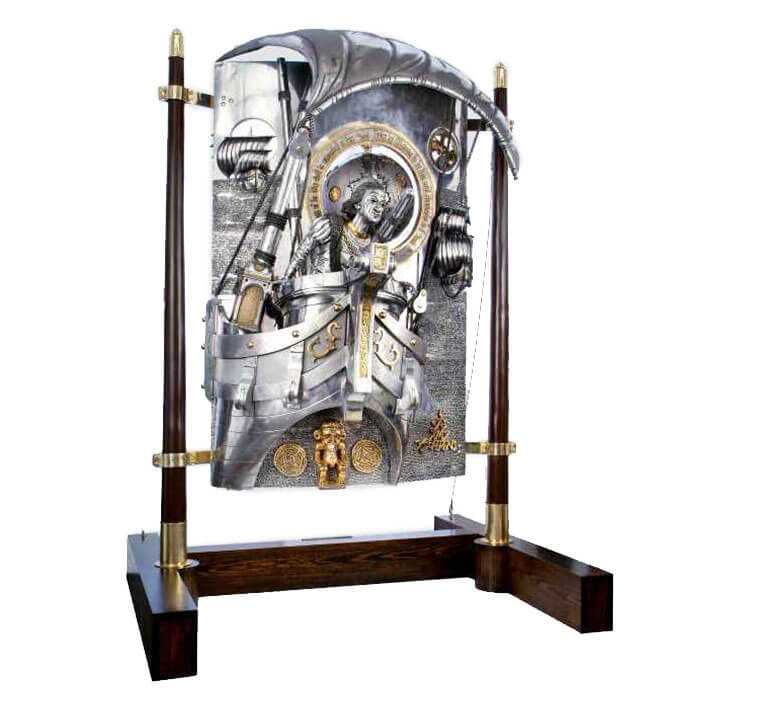 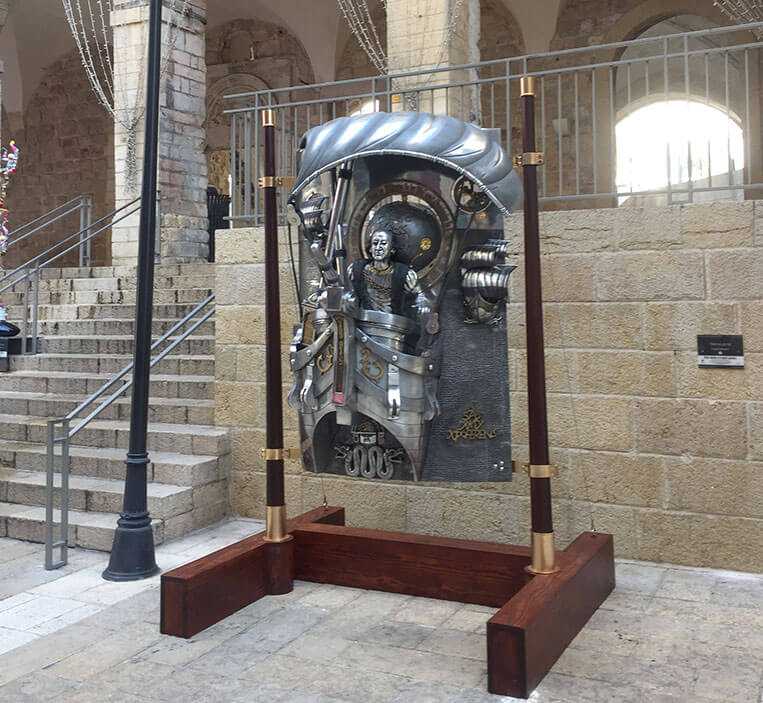 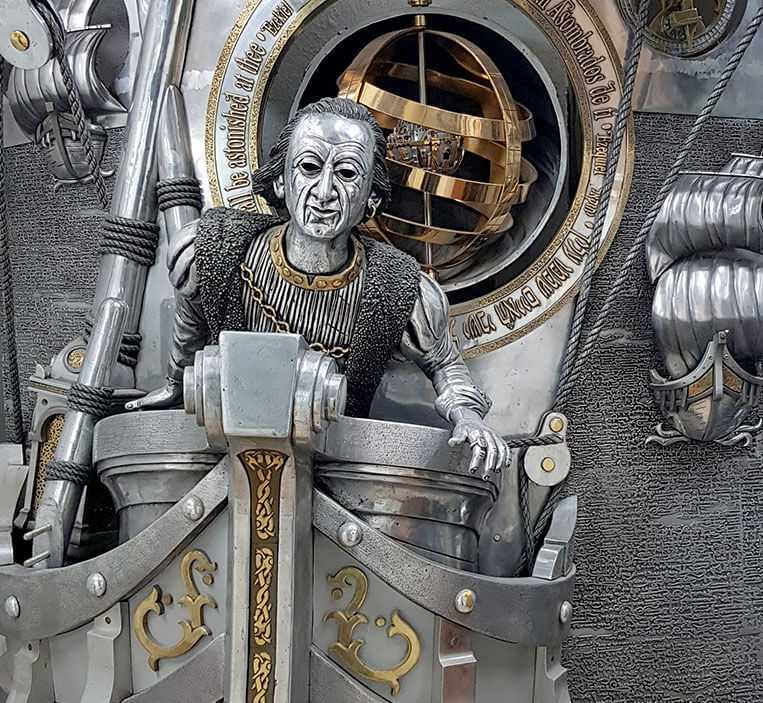 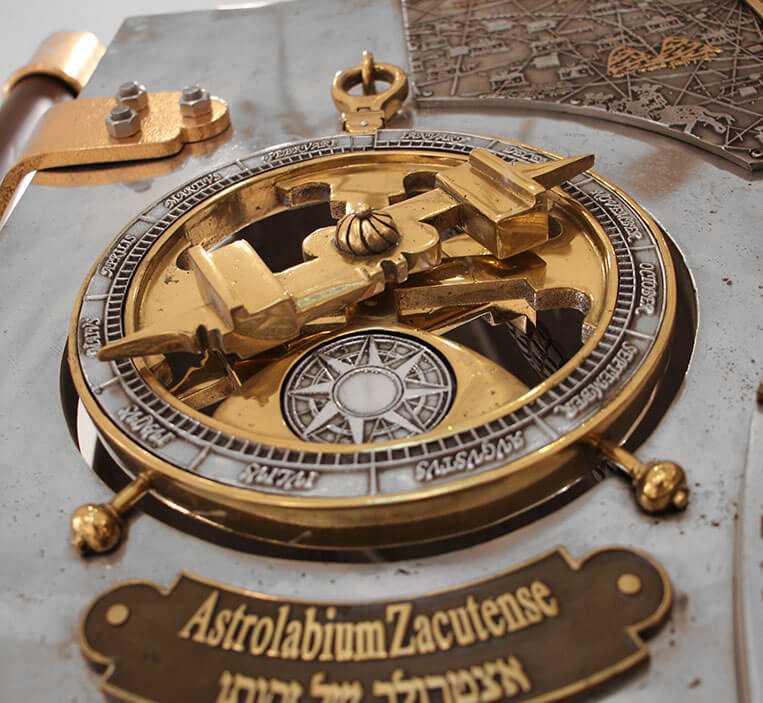 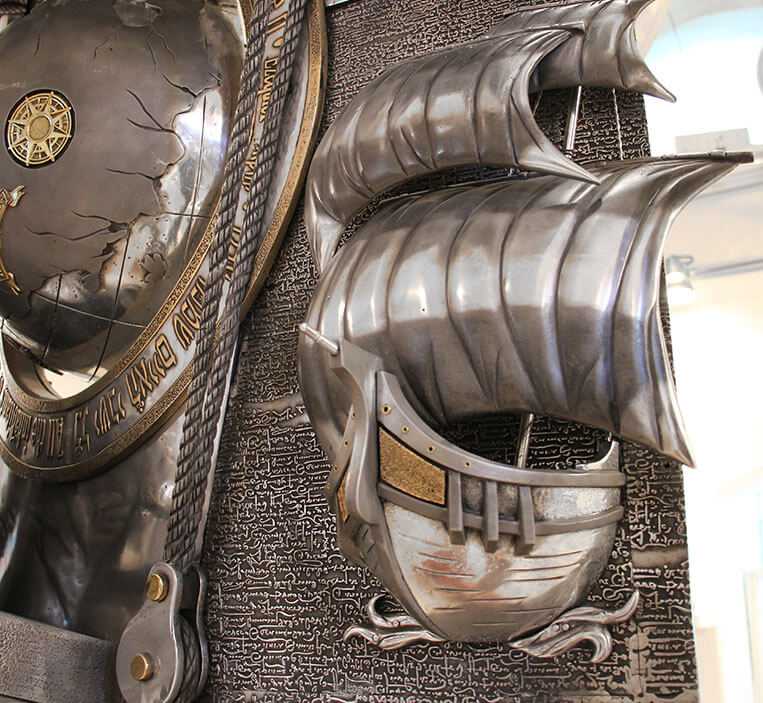 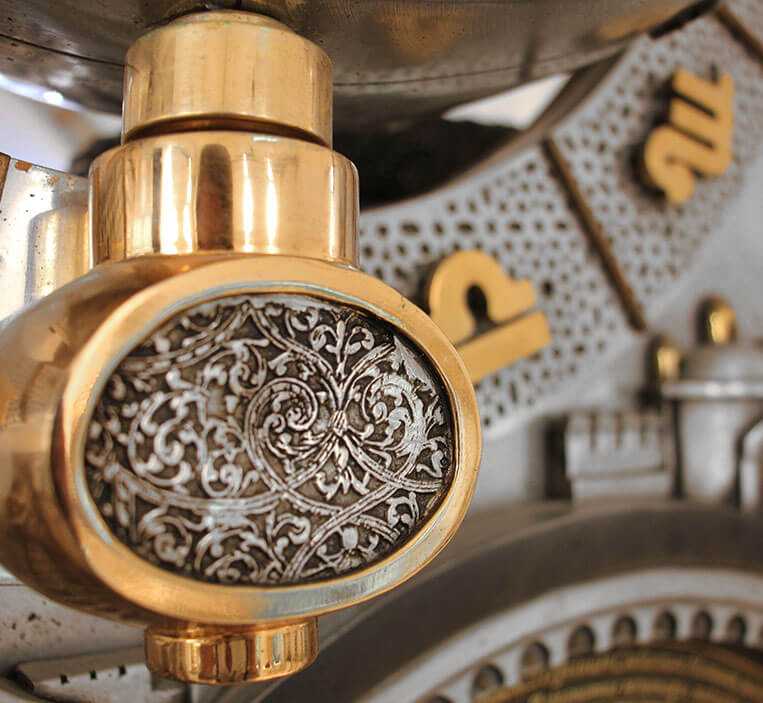 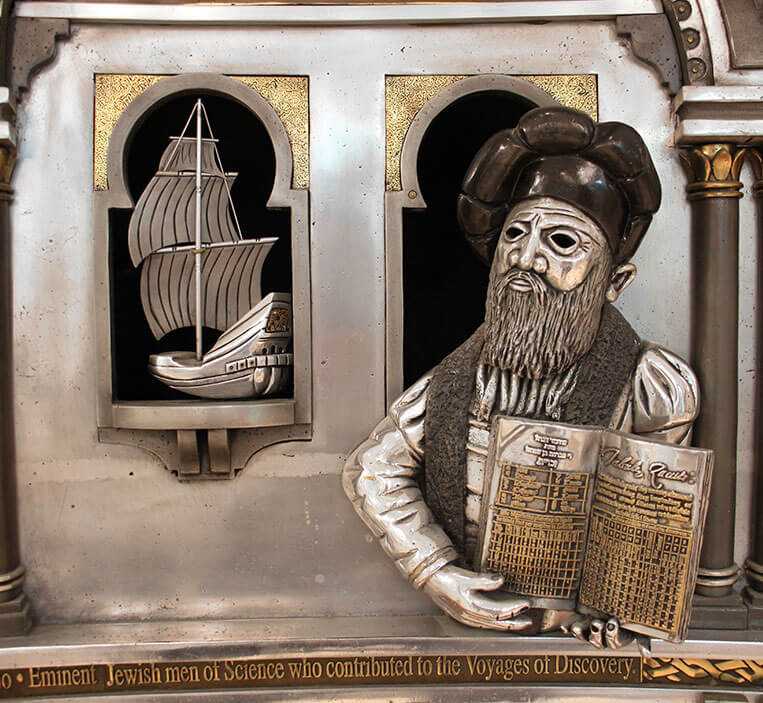 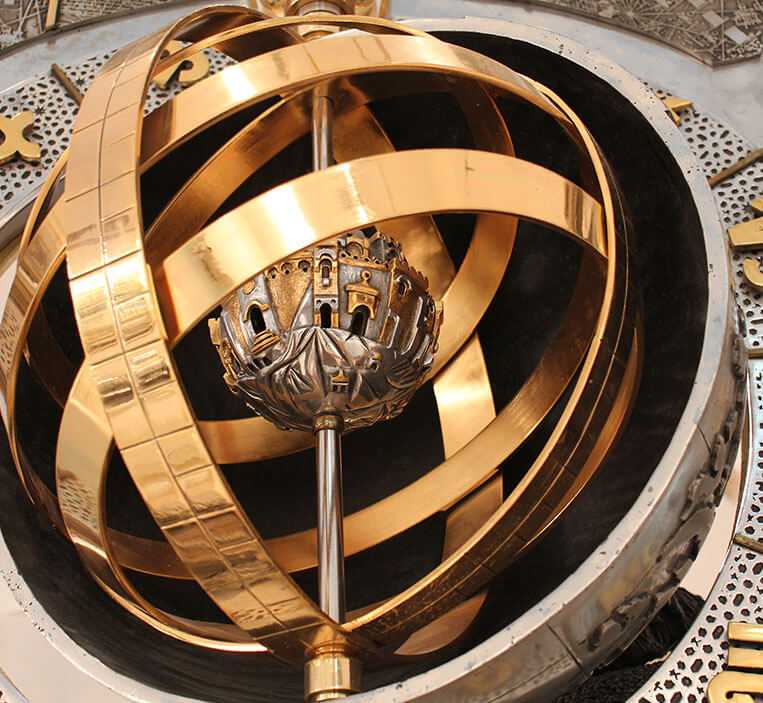 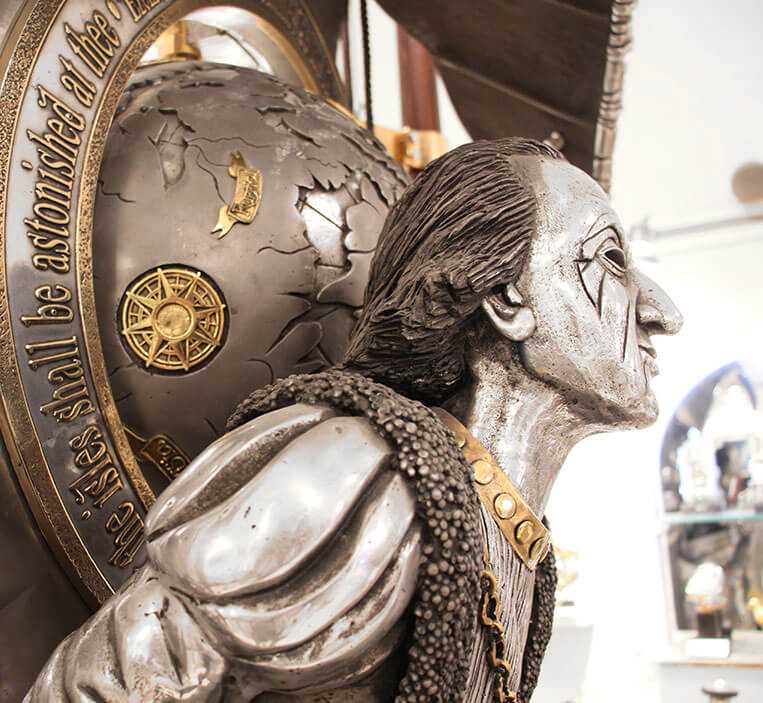 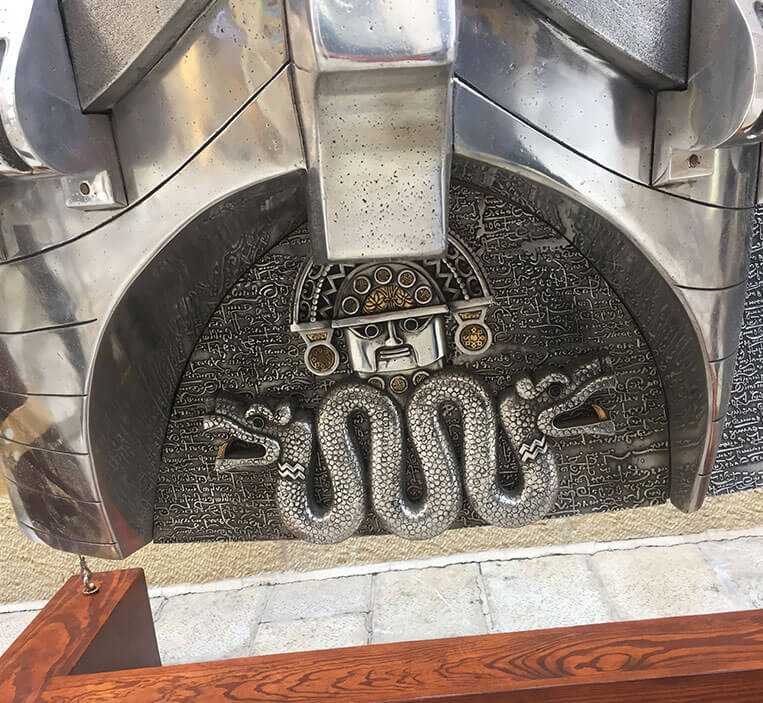 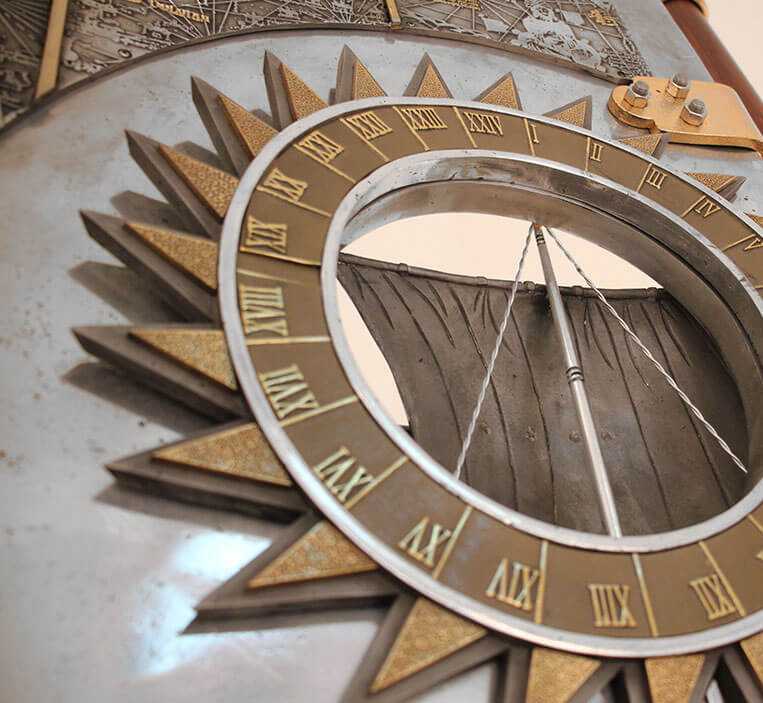 Columbus is placed at the prow of the Santa Maria, leaning out, desperate to detect the first sign of land ahead.

The most crucial time of his life must have been in those two days “grace” his mutinous crew had given him to sight land before turning back on a home voyage which, even had they survived, would have branded him a fraud, a charlatan and pathetic failure.

Before him—if land would indeed be found in those last hours—was the total vindication of his life, immense rewards, fame and his assured place as one of the great men the world has known. For an unknown adventurer who had gambled everything, it was the moment of his fate.

The cursive handwriting, he used to record this voyage, created an impression of the ocean with the Nina and Pinta flanking his ship some distance behind. His cryptic signature, open to many interpretations (including Kabalistic), stands out in gold on the front panel.

Behind him and circling his head, is an armillary sphere set into a semi-globe, and the northern hemisphere, as interpreted by the cartographers of his time. This is framed in a circular ring with a quotation from the prophet Ezekiel (27:35), “All the inhabitants of the Isles shall be astonished at thee.”

An arched cave life space, at the base of the Santa Maria, holds an Indian God of gold with precious stones, hinting at that mixture of motives, excluded and venal, which prompted the voyage and resulted in that transformation of our history, symbolized by Columbus.

The sculpture is approximately 1.85 meters high and 1.25 meters wide (6 ft. x 4 ft.), made of pewter and bronze, with gold and silver-plated elements. It is visible on both sides—the obverse side illustrates navigational instruments, maps, seamen and mapmakers such as Rabbi Abraham Zacuto, Cresques and Vecinho, whose works made the great voyages of the 15th century possible (and whose “reward” was the infamous expulsion of their people).

The sculpture panel has been exhibited in Madrid, Granada, Lisbon and Gerona. A full-size copy has been commissioned for Mexico City. One stands in Jerusalem on The Mamila Boulevard.

“On the Vistula Facing East” $44 Order

We inhabit the world with the animal kingdom, they are our cousins with whom we share the pain and pleasure of the planet we live on. Ferocious, pathetic, playful and pretentious, we also share their characteristics. In our animal sculptures we seek to capture this common ground. Like all living things our animals have moving parts, textures and shades that await to be explored.

Large sculptures keep us busy but we allow time for making beauty in miniature - objects of art to wear. When we see our jewelry displayed on the body of its owner as a statement of his choice, we feel the pleasure of a silent bond, a little secret shared with a stranger.

The professions and hobbies we practice shape our lives and alter us. This is emphasized in the group of figures who pose, perspire, lecture us, swing bats and golf clubs. They humorously draw us into their activities, make us swing their heads and open hidden doors to expose their hidden secrets and surprises.

Our Universal Figures embrace images of painters, artists and great thinkers we admire. In each we look to express what motivates the figure to be what it is.